Hey all! So we've been doing the 12 Months Together for ten days now and it seemed like time for 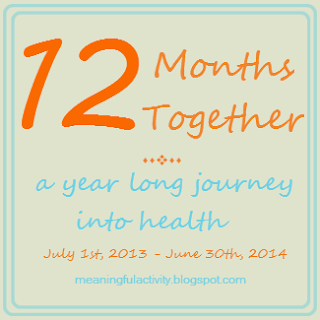 the first update. I'd like to make these roughly weekly.

As far as the group goes, there are ten of us, and we're all ladies. 7 out of 10 of us have PCOS (I did put a recruiting post on a PCOS facebook group, but also some of the ladies who were attracted to the challenge before I did that had PCOS. Probably because women with PCOS are motivated to make changes due to the health issues we face daily.) But it's not really a PCOS group, it's just about health and fitness.

We picked our pinterest challenges. Well, two members are facing health issues so aren't focusing on exercise right now, but it's a health and fitness challenge, so we're just hoping their health improves no matter how it's tackled and they'll be joining us in the fitness challenges super soon.

The other challenges range. Most people picked a very specific challenge, focusing on one exercise (increasing daily) or one or more body regions they want to improve.  The challenges range from squats, jumping jacks, core toning, one "abs, booty, and thigh" challenge, and walking. Most people are on, or exceeding, their target and we've already had some people report small weight losses.

I asked the group if any of them wanted to share their journey with you, and Alison did. Her challenge for the month is a jumping jack challenge to build her heart up. She has a mild heart condition, and it is painful for her to do cardio vascular exercise. However, her doctor has encouraged her to slowly build her heart's strength by pushing her limit. So on day one she did jumping jacks until she felt it would be too much to continue (she got to 35) and is adding a few more each time she does it. She's aiming for four days a week, but is finding that difficult to keep up because she was recently given more hours at work.

In addition she's been counting calories and watching what she eats!

As for me, I shared my challenge with you. Unfortunately I got sick and sort of got behind. I got a sinus infection. I'm better now (well my nose is still a little stuffy but I'm not feverish or fatigued or dying from a major headache or crying for no apparent reason, so I'm good!)

Blessedly, I built in rest days to my month, so I just put black Xes over them, and suddenly I'm not behind! Isn't that great?

However, I realize I may need rest days later, so I'm giving myself the ability to "earn" them back by doing more than today's exercises and rolling the reps over. So that if say, each day I do 25 extra jumping jacks, then after 4 days if I have 100 jumping jacks to do that day, I can just rest (only I have 8 different exercises daily, so I'd have to simultaneously do it for all.)

I'm all caught up for today, I've been exercising the past three days after being sick, and I can already feel myself gaining muscle.

I didn't calorie log while I was sick.. and honestly, I'm not sure why. That's just lazyness, because at this point I haven't set limits (I'm trying to stay under what myfitnesspal has set, but if I don't, no penalty.) But so I'm doing that again now.

That's a six pound loss in two weeks, actually, not ten days, since I weighed myself I think four days before we started. And I just got over being sick, so maybe I'll gain a few back, but hopefully not.

One change for me from when I was dieting and exercising regularly two months ago is now I'm on metformin, which is a generally effective drug for women with PCOS which, among other things, usually assists in weight loss. So maybe that's given my efforts a boost. I do think it's probably why I didn't gain anything during my six week set back.

Also, my body is probably like "oh, good, we're being active again" and maybe responding enthusiastically. I mean, if you've ever watched those weight loss competition shows, the first week is usually the most dramatic. So I'm happy, but realistic.

When I got over my lung infection like a month and a half ago, I weighed what I weigh right now.. but I gained it back in 5 days because obviously it was an artifical "I'm siiiiccckkk" weight loss, not a healthy loss. And since I was just sick, maybe this is too... but I was soooo much sicker when I had the lung infection, plus I was coughing literally every two minutes or more frequently, so I'm sure I burned tons of calories from the constant stress on my body. Where as this sinus infection was really just a bad cold. So if any of this weight loss is artificial, I don't think all of it is!

Anyway, I'm happy to be updating you and look forward to doing it again next week.
Posted by Pamela M M Berkeley at 5:14 AM

Email ThisBlogThis!Share to TwitterShare to FacebookShare to Pinterest
Labels: 12 Months Together