Okay I said I was joining then haven't posted an update.

Basically this was because I didn't actually work out though I did look up work outs. And then didn't do them. Part of this was laziness, but then part was fear.

Fear, you might ask? Well, to be honest I started losing weight for no good reason! I was up two pounds from when I found out I was pregnant at the beginning of week 20, steady for a few weeks... then at the end of week 20 I was back at the same weight as when I found out at week 7! This despite the fact that the beginning of week 20 brought an increase in appetite and I began to eat more. This was worrying me and making me hesitant to work out because when I should be gaining but am losing, burning more calories doesn't sound like the best idea. So even though I'd written that I'd work out more to you, I was hesitant to do so...

Then on Wednesday I weighed myself again. I always weigh myself with as few variables as possible, so I'm pretty sure it was accurate: I had lost half a pound! What the heck?! Here I am at 21 weeks 2 days and I weigh less than when I found out I was pregnant?

I freaked out a bit, but ended up looking up articles about losing weight in pregnancy. And they calmed me down. Basically retrospective studies (looking at medical records after the fact, versus giving on going care during pregnancy) of obese women who lost weight during pregnancy showed that they had a far less chance of having complications during pregnancy like pre-eclampsia and gestational diabetes. Doctors aren't ready to recommend women TRY to lose weight, since they fear it'd have a negative impact on birth weight (and aside from GD, bigger generally means healthier with newborns.) However if you're obese and weight loss is just happening, like it is for me, it's probably not a bad thing. So that relaxed me. Also, every single article I found mentioned that regardless of weight or whatever that unless they're on bedrest the doctor's recommended exercise for all pregnant women, but especially the obese ones. So, the fear went away and I figure even if it does lead to another pound loss it's better to just exercise.

Around this happening a pregnancy group I'm on facebook with recommended squats as being great for pregnant ladies cause it strengthens the muscles we need for labor, so I did some. I think I did 15 squats before bed. Not a large amount, but something to start me rolling. Then on Thursday I went for a 20 minute walk and did 50 leg lifts on each side in bed. And today I've done 20 squats... but my knees hurt a little. Darn relaxin. So maybe I shouldn't do squats or only do them in increments of ten or something.

So my new goal for this week actually is to look up mini exercises like that and here's my thought: I'll make a list of small bursts of pregnancy safe exercises divided up in small doses. I'll try to do at least one "dose" a day but also try not to do more than 3, considering my weight loss. That way I'm being more active but not overdoing it. I know with working out I tend to be all or nothing, so moderation is good. If later on I start gaining weight, I'll increase my activity with no guilt. Oh, and if I find myself with access to a pool you'll have to drag me out, I'm not coming out until someone forces me. Gosh, I miss swimming.

So that's the goal for the week, to ease myself into deliberate exercising again without over doing it. I'll update y'all on how that goes next week. Also I have a doctor's appointment before then, so I'll be talking about my concerns with her and we'll see if that changes anything.

Hope you all have a fabulous week! 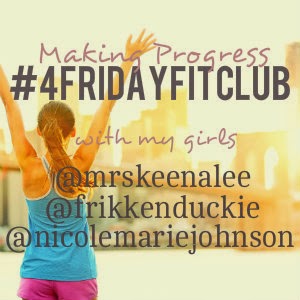