Yay! Baby girl is six weeks and I thought I should update you on my progress now that I can exercise again.

First the stats. I had gained 17 pounds during pregnancy. I lost it all in the first two weeks and lost an additional 11 as well! I was rapidly losing weight until five weeks. This brings my weight loss since moving to India to 56 pounds.

I am logging again on myfitnesspal. I've logged for the past four days straight. I can't really do a lot of calorie restricting since I'm breast feeding so I've decided to do it this way: I set my goal as lose one pound a week but then add breast feeding as an "exercise" that gives me an extra 500 calories a day.

I'm also doing actual exercises, but easing myself into it. I have been doing dumbbell stuff with my arms, leg lifts, some an exercises. Did some jumping jacks the other day, took a short walk with baby girl in the ergo on Monday. I was on bed rest for three months (one full, two modified) so my muscles are shot. It's especially bad with my back, hips, and abs. So I am easing into it, listening to my body for its limits and stopping... but then going a tiny bit further the next day.

Yesterday before sleeping I tried to do some lying down ab work and my lower back protested. I stretched and realized my hip was crazy tight. So when I woke up today I got a dance workout that I knew really got the hips and was able to do 20 minutes of it before my daughter's crying stopped me. I call that a success.

Lastly, a few hours ago I took measurements of myself for the first time since pre-pregnancy. Since I am not at all toned I thought it'd be bad honestly. But I lost on all of them except my bust! And since they're now milk makers that gain makes sense.

My daughter and I dressed for Independence Day. 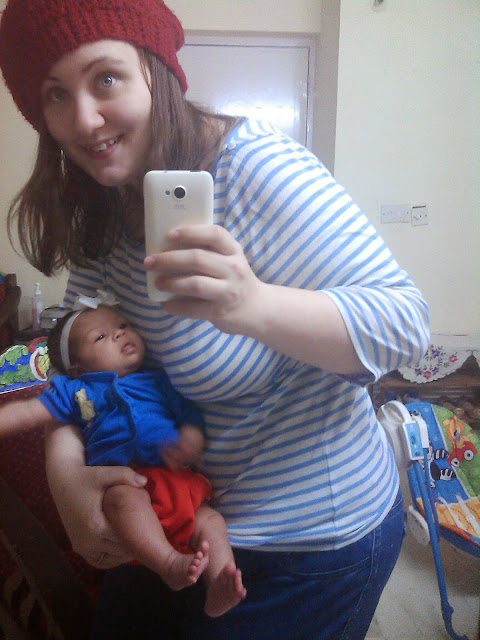